There are two ends of the spectrum when it comes to writers. Plotters: those who in fine detail outline the order of events within and outside of their narrative. And Pantsers those who sit down and go on a journey with their characters as it happens. Every writer falls closer to one side.

Who created a chart akin to DnD alignment 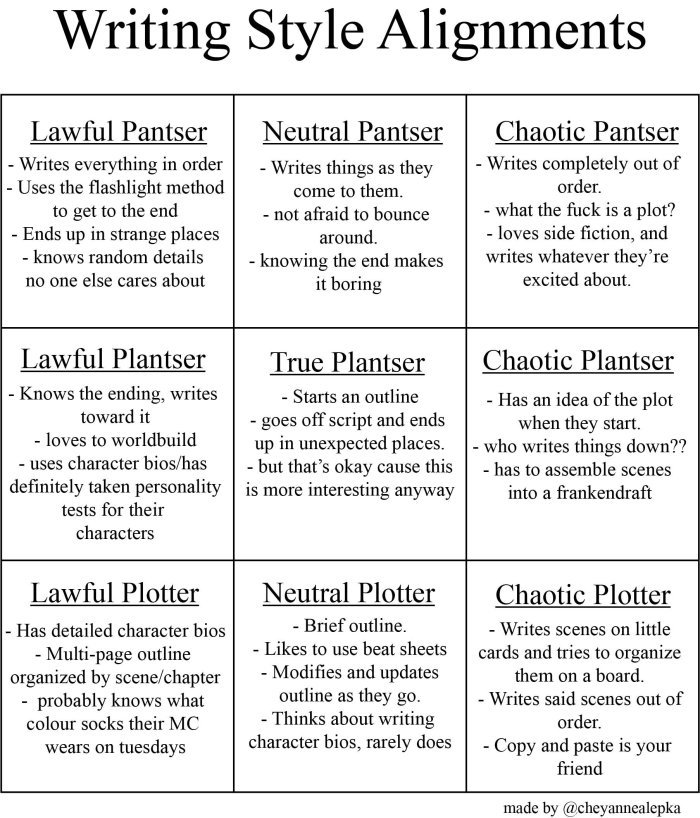 And this is the process I use.

Which is both frustrating and exciting.

I start with the problem and a question what would happen if?

Goblins used guns, Miners discover a dragon egg and abandon their contract, A duke is on a hunting expedition to slay a dragon,

Exciting because I don’t know how my stories will end or what turns they will take.

Frustrating because I thought it was going one way but no it went another.

Fiction unlike reality, or this blog, has to make sense

So I have a loose outline, but I have to keep the characters fidelity high. Which means that if a character is about to act out of character just so I can have everyone hit their marks and move the story back to the outlined path, I won’t go there. Sometimes that means my characters demand I scale a vertical cliff or walk through a dangerous marsh rather than stick to the simple well laid path.

When I hit these difficult patches, I do a lot of thinking. What do I need to do now? And I work though in my head over a dozen or two dozen unwritten paths, until that eureka moment hits and the wall is scalable and entertaining. Then I do that.

Though I am still a little sore that I was unable to use pirates in my last story because. I had them roughly outlined, their motivations, weapons, etc etc. But the characters on stage demanded more screen time and had a far more interesting tale to write. SO I put those pirates back in the cupboard and when I get a chance I’ll see if I can use them to spice up another story.

Oh man I am going to have to rewrite this post a few times to get the words as they should be.

If you found yourself in this chart and want to argue. I’ll be in the comments below.

writer of words. Teller of tales. Leaking insanity from every notion. View all posts by @HppoTweeter